After your first day of cycling, one dream is inevitable. A memory of motion lingers in the muscles of your legs, and round and round they seem to go. You ride through Dreamland on wonderful dream bicycles that change and grow.

~H.G. Wells, The Wheels of Chance

(written on Saturday, Aug. 9, 2014, but I did not have internet connection while dog-sitting, so posting late.)

I finally got back on my bike yesterday.  This past week has just been busy.  I don’t remember what it has been busy with, but I haven’t had a chance to get in the saddle until yesterday.  I was super excited to get out there again to try the new brake pads I got installed from my bike shop on Monday.

About that trip to the bike shop for brake pads, well, I was nervous bringing my little bike in to such a high end place.  However, true to great fashion, the guys in there were awesome and had me rolling in no time.  I did get a chance to browse the bikes and now I have my eye on one, an actual road bike.  She’s a pretty little light blue thing and around $400, but I think I can save some pennies for such a nice ride.  Not that I haven’t really fallen for my mountain bike.  Really, I love it and what I can do with it, but I don’t want to go road cycling on it.  The greenway that I ride on, with its various terrains ranging from gravel, paved, and boardwalk, is more suited to my mountain bike.  For actual road cycling, I’d prefer an actual road bike.  I’ll keep looking and working on my skills and get my confidence up for a road ride, and dream of a light blue sweetie.

So, yes, I finally got riding yesterday.  My strength was bad and I barely completed my 11.4 miles.  I was afraid that I might have to go back to doing only 8 miles for the next couple of days, which really bummed me out.  I didn’t want to backtrack if I didn’t have too.  I was just so exhausted and headachy.  So I thought about it a lot and decided it wasn’t my muscle strength that was the issue, it was just my energy level.  I mean, I found myself taking a nap in the middle of the morning after my ride because I was just tired and I didn’t even go for my walk that morning because I’m dog sitting and not at my house.   At work that evening, one of my co-workers commented that I seemed to be eyeing every piece of food my colleagues were snacking on like a hawk looking for dinner.  That was when it dawned on me: I need more food! I’m starving and have no energy because of it.

I’ve been trying to eat healthy, but looking at the calories I’m expending walking and biking, which according to my app can be anywhere from 700-1100 a day depending on my workout (which I think it’s actually more than that since I sweat so much), plus massaging which burns roughly 60 calories an hour, for a total of average 900 calories a day, give or take some.  My diet is mostly consisting of fruits, vegetables, and a little pasta with a bit of meat, and half a gallon of water daily.  I don’t think its energy giving enough.  Yes, I’d like to drop a quite a bit of weight, but I need energy to do it.  So I think I’ll up my proteins and some of my whole grain carbs to boost my energy levels while still being healthy.  I’ll play with that and see if it balances out.  So for lunch yesterday I had pasta made from spinach and whole wheat and for dinner I had a nice helping of chicken parmesan. Ahhh, I felt so wonderful mentally and physically after that dinner; more energy, more clarity. I think I might be on to something here.  : )

This morning I woke up and took my bike out to the greenway with a goal: 23 miles.  I’ve never ridden that far in my life and I felt like it was overly ambitious, but I wanted to try it.  After yesterday’s “defeat”, I wanted to push myself to a better goal to feel better.  23 miles would be the greenway twice.  I knew it would be incredibly tempting to throw in the towel when coming back to my car the first time around, so I decided to reward myself.  The greenway I take has a Starbucks at one end of it (the far end that I bike to and then turn around to come back to my car), so I thought to make me keep up my momentum, I’d treat myself to some Starbucks lemonade and allow myself to chill out there with a book for a 30 minute break before hitting up the last quarter of my ride.  So with a goal and a reward in mind, I set off this morning.

It was a humid, cloudy day in the Queen City.  Just riding a mile and the sweat was already running down my face, making me happy I’d bought a new handlebar bag that could hold my sweat towel. Although the weather was humid, the greenway was still decently crowded with walkers, runners, and my pet peeve, amblers.  Amblers never get out of my way, despite my very audible calls of  “On your left!” which makes me have to lose momentum and slow down to pass them without hitting them.  The worst are whole families that spread across the whole walkway while walking or biking.  Ugh, but typical Saturday crowd.    Around mile 2.5, two teenage girls were ambling along with a dog coming towards me, when the dog decides to get right in my path and I’m forced to slam the breaks.  Have I said thank goodness for my new breaks yet?  They worked so well that my back tire came off the ground and I was hovering on my front tire for about five seconds.  I thought I was going to go over the handlebars, buts thankfully I didn’t.  If the biking hadn’t already gotten my heart rate up, that little incident definitely did. The rest of the ride wasn’t as eventful, but I did see a hawk sitting pretty only 20 feet away, a garter snake crossing the path, and a deer far off in the woods.  I took it slow and allowed myself a 10 minute stretch/water break every 6 miles.  The second go around towards Starbucks reward went quicker than I thought it would, and the way back to my car was the fastest.  But oh I DID IT!!!!  23.2 miles in 2 hours and 45 minutes to be exact!!!  I was drenched in sweat, sore, and exhausted, but I did it!!!  I took quite a bit of time stretching afterwards.  I’m feeling amazing right now, after having lunch and a shower of course.  However, my lady parts are feeling a bit bruised and chafed, so I think I might finally need to invest in some proper cycling shorts.  Hmmm, ok, I’m off to go Google “What to look for while buying cycling shorts?”  Happy trails to ya’ll! 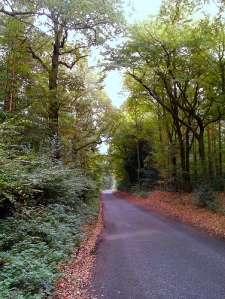